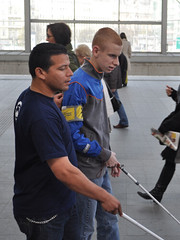 Orientation and mobility training aims to improve the ability of blind people to travel from one place to another. In BlindBits an accessible level editor and player for creating orientation training games for blind pupils were developed.

The game environment was an accessible – meaning non-visual, auditive and haptically graspable – virtual model of the school building, in which the pupils could place game content (e.g. sounds, tasks) with the editor to create an educational game level. The level was played with the developed player and shared with other pupils. By navigating the virtual world the structure of the school was memorised and by integrating this in a game, the motivation of pupils for the orientation training was increased.

During the course of the project a user-centred design approach was used in which (haptic and acoustic) participatory research methods suitable for blind pupils were applied. Pupils (and teachers) could contribute intensively in the different project phases (requirements analysis, concept development, design, implementation, evaluation) of the level editor and player, for example by workshops and interviews. The details of the project implementation were worked out together with the pupils. High quality was assured by following an iterative approach with repeated feedback cycles. A central aspect in this was the adaptation of the research methodology as well as the game design to the requirements of the 14 to 18 year-old pupils involved in the project.

The BlindBits project formed the basis for another Sparkling Science project, the project “RRI Blind-Bits”. In this new project RRI BlindBIts researchers from the Austrian Institute of Technology analysed the BlindBits project together with pupils from the Sir-Karl-Popper-School. The focus of the new project was on the concept of responsible research and innovation (RRI). The original BlindBits project was analysed by the pupils according to the six dimensions of RRI and subsequently an RRI Statement was written that summarises the findings. The dimensions that were analysed are: 1) the inclusion of citizens and civil society organisations, 2) Gender and gender equality, 3) Science education, 4) Open access, 5) Ethics and 6) Development of a governance framework for implementing RRI.