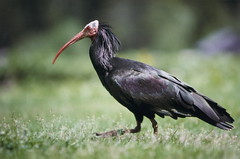 The Northern Bald Ibis (NBI, Geronticus eremita) is worldwide one of the most endangered bird species. The sedentary, free roaming, individually marked and semi-tame NBI colony of the Core facility KLF for Behaviour and Cognition of the University of Vienna in Grünau im Almtal (Upper Austria) provides important information about these colony breeders’ social behaviour since 1997. This data served as know-how for different reintroduction and conservation projects in the past years.

Further detailed information for the management of this endangered species in the wild could be gained in the course of the present project by focusing on the social cohesion of the colony and by monitoring physiological and behavioural parameters. The project has provide an integrative picture of social life in a colony by means of

(1) GPS/GMS transmitters and simple observations;
(2) data about the physiological state of animals in relation to external and internal factors through regular blood draws;
(3) classical behaviour observations for additional information about the hierarchy and the spatial distribution of the individuals.

The following research questions were addressed: Are there any individual or group-related patterns in relation to the flying area? Which are the effects of social rank and flight behaviour on haematological parameters?

Beside the necessary know-how and scientific networking in order to answer these questions, the KLF is partner in an EU LIFE+ project for the reintroduction of the NBI in Europe and claims a long-term and successful cooperation with several local schools. Five educational institutions from the region Almtal (Province Gmunden, Upper Austria) were involved in the project. Their tasks have been adjusted depending in the age of the children: the Kindergarten children acted as multipliers documenting the presence of the birds in the local area, the primary school children participated in the data collection on tablet PCs, while the high school students were involved in further steps of data-analysis (GPS data, behavioural and physiological data sets).

In general, this project provided the valuable opportunity to involve pupils in basic research and to show them in a tangible way how this represents an essential prerequisite for any applied research approach.

The aim of the project “Involving young and old citizen scientists in monitoring habitat use of the critically endangered Northern Bald Ibis (geronticus eremita)” was to collect more information about the ecological qualities of the foraging grounds used by the free-ranging Northern Bald Ibis colony of the Konrad Lorenz Research Station with the help of citizens.