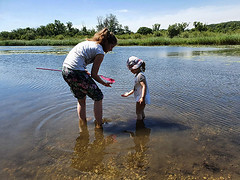 Biodiversity of Phoxinus minnows in Austria

European minnows (Phoxinus spp.) are small schooling fish that inhabit cold, oxygen-rich flowing, and stagnant waters. For over a century, scientific literature anticipated only one widespread Phoxinus species distributed in Europe. However, recent studies have shown that the "European minnow" is a species complex that includes up to 23 genetic lineages, thirteen of which are currently recognized as valid species. The same is true for Austria, instead of one; four species were identified in Austrian waters, of which three probably occur naturally while one is introduced. Besides the introduction of their non-native relatives, native Phoxinus species are threatened by several other factors, with climate change being on the top of the list.

To assure the long-term protection of minnows in Austria, their diversity and distribution need to be assessed. Thus, a project team was put together, including scientists from the Natural History Museum Vienna, the Research Institute Mondsee, and other experts in the fields of biology and marketing, together with two Citizen Scientist groups, students and anglers. They will work as a team to gain new scientific knowledge: How many and which minnow species live in Austria? Where do they occur naturally, and where were they introduced? Does their distribution allow conclusions about their ecological requirements?

In addition to the scientific goals, the project also focuses on education. Students will get to know all steps of the research process, from collecting and sampling fish, surveying physical and chemical parameters at the study site, to the laboratory work including genetic assessment, and finally, participating in the evaluation of results. Through their active engagement, the project aims to increase students' interest in research, natural sciences and their awareness of biodiversity and environmental conservation issues. The teachers involved can incorporate methods and experiences into the education process. Finally, anglers will also have the opportunity to actively cooperate in the project, get to know "their waters" from a new perspective, and merge their applicative knowledge with the one of researchers.