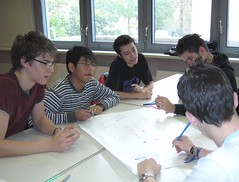 Austria is an immigration country – this is also reflected in the composition of school classes. 16% of Austrian pupils’ mother tongue is other than German – in Vienna the percentage is even 38%. Until now the altered situation was addressed above all in the field of language competence by introducing supportive German classes and additional tuition in the respective mother tongues. „The various backgrounds of the pupils are not only relevant in terms of language skills but to the entire education“, says Gertraud Diendorfer, Executive Director of the Democracy Centre Vienna. Young people attending the same grade have different family histories and experiences transmitted through generations which can differ in a significant way. In the research project „Intercultural tracking“, which was carried out in the last two years at the Democracy Centre, the historical consciousness of pupils in culturally heterogeneous classes was investigated. In the course of the project, strategies for an inclusive education, taking up the different experiences of the pupils, was developed.

In search of migration stories and oneself

Strong emphasis was put on the cooperation with schools, teachers, and pupils. 70 girls and boys between 15 and 22 years old dealt intensely with the topic of migration in the coming months. They were attending three different schools: the HTL Wien 10, the Schulzentrum Ungargasse, and the BG Gmünd close to the Czech border. With the support of the project team of the Democracy Centre Vienna and their teachers the pupils became researchers themselves and made an interview with their parents about migration stories in their families. Before, the pupils were interviewed about their historical perceptions. In social memory research the biographical context is regarded as one of the central sources for the formation of historical perceptions. By asking their parents an additional source could be opened up and the young people could be motivated to reflect on their own point of view. In mid-October 2009 the first workshops took place at schools where the project was presented to the pupils.

Before beginning with their intercultural tracking in January 2010 the pupils were acquainted with scientific methods and learned how to create a questionnaire. The research results were presented with active participation of the pupils. In cooperation with the NGO „Initiative Minderheiten“, that in 2004 organized the exhibition „Gastarbaijteri“ about the history of labour migration, the pupils created a travelling exhibition to be shown at other schools.