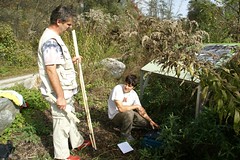 Alien plants and their role in reconstructions of river banks

Floral and climate change are currently discussed widely not only in research but also in public. Alien plants are regularly mentioned in the news and linked to “horror-scenarios” due to their ability to cause phototoxic affections, allergies or asthma. Changes in the native flora and fauna are often mentioned in connection with climate change although a massive change in the flora has been happening continuously since the beginning of the new age.

Especially in areas strongly influenced by humans, alien plants sometimes dominate the flora and vegetation. River banks are affected in particular because of their natural dynamics of frequent disturbances. Native plants are often displaced by alien species because of their ability to make their way. This is accompanied with all the negative side effects concerning the dynamic stability of these particular habitats.

In course of this project, scientists and pupils wanted to find out whether it is generally possible to do reconstruction activities which could be called successful from a botanist point of view. The central questions were: - Is it actually possible to establish an autochthonous flora through a natural succession process? - When and why is it possible for alien plants to dominate a particular habitat? - How sustainable do alien plants settle in particular habitat?