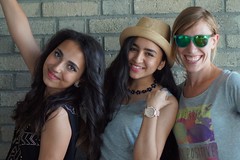 Young people from Tirol explore together their familiale migration history

Numerous social-historical studies have shown that migration has long been a part of human existence on the planet. If migration movements are as old as humanity itself, world history can be read as a history of migrations. Large-scale population movements have also occurred in Europe. In the 19th century, also called the age of migration, more than half of the total European population had already left their own place of birth. Why not simply look at your own family history? One can speak of family migration experiences when, for example an uncle emigrated to Canada for reasons of work, or grandparents left Vienna and relocated internally to Tyrol. Doubtless there would migration stories in virtually every family just looking back on Austrian history in the 20th century: the massive migration from the Crown Lands around 1900, the population movements after WW II, labor migration and European border openings.

The Sparkling Science Project “Gesichter der Migration” (‘Faces of Migration‘) starting in July 2017 aimed for a shift in perspective into one’s own family history. In the framework of this project, youth from Tyrol explored their own family stories together with scholars from Innsbruck University. The goal was to open up new horizons and to uncover previously invisible knowledge and potentials. Questions that beckon to be examined include: How are people integrated in familial and other trans-border networks? How do they move within transnational spaces? How do they combine differing elements, developing from this hybrid matrix their own plans for life?

Scholars working together with pupils of a new middle school (NMS) in Innsbruck and a new middle school in Fulpmes explored these questions. In this connection, the adolescent pupils are perceived as experts on their own life practices and are integrated actively into the entire research process. They developed their own research questions, which they then examined through open interviews with their parents and relatives. In addition, the middle school pupils searched for traces of migration in the individual urban neighborhoods, making these visible utilizing methods of ethnographic fieldwork.

With a direct and unbiased view of everyday practice and family histories, the pupils discovered diverse realities of life and telled stories that reveal migration movements in a new light. Research seeked to investigate how migration experiences in individual families are perceived and evaluated and whether there is knowledge or consciousness present in regard to migration. Proceeding from the findings of research, the researchers together with the NMS pupils organized an exhibition and a conference at Innsbruck University. In addition, an online publication on the findings of the project was put together targeting a readership at schools and the general public. Thus, this project on one hand seeked to make an important contribution to inquiry on family migration stories and urban histories. On the other, the findings of the project can serve to create a new and different local awareness about migration and diversity.