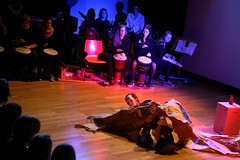 • How can experimental-improvisatory artistic interactions be described as aesthetic and social phenomena? Which methods are especially appropriate in this context?
• Which conclusions can be drawn so as to support aesthetic competences in music-teaching?

These questions could be regarded as crucial for our project Individuum-Collectivum. Pupils of form 7A of BORG-Nonntal worked on a music-theater-performance based on Vinko Globokar’s score Individuum-Collectivum (1979). The composer, born in Slovenia, regards music both as an invitation for reflection and as an integral part of life. This conception inspires him to integrate psychological considerations, sociocritical statements and humanistic ideals into his work that can be described as ‘l’art pour l’homme’. The experience of those performing, individually and as a group is of basic significance. Globokar’s models, asking for experiment and improvisation, left plenty of free space for the pupils. They presented some selected examples in the context of Salzburg Biennale 2013 and also described the significance of the way they had to go individually and as a group. Thus the artistic process as well as the product was investigated into. In the cooperation of the young people, their teachers, teacher-trainees at University Mozarteum Salzburg and the researchers skills and abilities, crucial in the fields of aesthetic and social competence, were worked out in order to be applied to different situations of learning and teaching.

The project comprised the following phases:

Phase I
• In an initial workshop the pupils received artistic impulses and were introduced to possibilities of observing,describing and analysing artistic processes.

Phase II
• In a search for material pupils, partly working in small groups, initiated artistic actions and commented on them in diaries on facebook. This medium offerd manifold possibilities for an exchange of ideas.
• In a workshop with the composer the pupils received further stimuli to be integrated both into the artistic process and its description and reflection.

Phase III
• The results of the process and the production were presented in a music-theater-performance (including a programme), a multi-media-documentation and a final conference that once again brought together the collectivum engaged in the project.